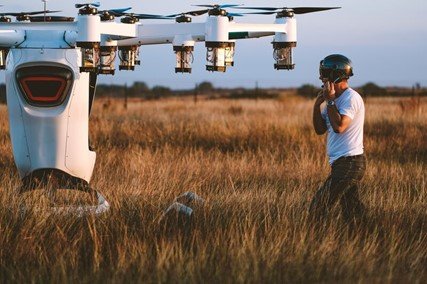 Safety and speed of innovation. Two concepts notoriously difficult to balance, certainly when it comes to aviation. Not so for US-based eVTOL business, LIFT Aircraft Inc. This startup is on a mission to make flight accessible to all. And they are well on their way to achieving it with HEXA — a new type of aircraft that anyone can fly.

Be the first to market without compromising on safety

From the outset, a physically fast aircraft was never the priority for LIFT. Designing and developing a safe eVTOL aircraft for urban mobility in a short space of time was. But the challenge facing this dynamic business was significant. How could they successfully blend safety, certainty, and speed in order to reach their goals?

“A lot of different technologies have matured and lined up to make right now exactly the right time for this type of business,” explained CEO Matt Chasen. “3D printing is one of them.”

This trust in newer technologies was more than just an afterthought. It had its place in the project from the very beginning.

“The first thing I started thinking about was how we can use new enabling technologies, new manufacturing technologies, to evolve designs really quickly,” said Balazs Kerulo, Chief Engineer at LIFT. “We got the Materialise team involved really early on for that reason.

“At the same time, I started looking at software that could do generative design to come up with lots of design options within certain constraints that we’d then refine further. Generative design pairs very well with 3D printing because — like 3DP — it doesn’t really care about the old constraints of traditional manufacturing processes.”

The powerful combination of 3DP and generative design has allowed Balazs and the team to print, test, and fine-tune parts at pace, enabling rapid evolution between aircraft prototypes.

Early on in the process, the team identified an ‘ultralight aircraft’ category in the US as their ideal go-to-market strategy. eVTOLs classified as ultralight require no FAA/EASA certification and no pilot’s license to fly. A perfect fit for LIFT’s ambition to democratize flight.

Choosing this route, however, presents other significant challenges. Most notably, minimizing weight to meet classification without any compromise whatsoever on safety.

“We’ve got a distributed powertrain. That means we have 18 motors and 18 batteries,” explained Balazs. “Great for safety, but it also means that the weight of any part to do with the powertrain has to be multiplied by 18.”

Coupled with this was the addition of ENDY. This part is unique in that its sole purpose is to reinforce the most critical joints of HEXA’s overhead rotor plane during a worst-case scenario — contributing to the structural integrity during a parachute opening should the pilot need to make an emergency landing. When activated, the parachute’s explosive canisters can expose the airframe to a momentary load of up to 11.5 g’s — comparable to that of a space launch. In that instant, the crown and its propulsion batteries will weigh almost two tons. Unsurprisingly, it takes six ENDYs to keep it together, preventing the overhead props from being torn down and getting too close to the pilot while still spinning.

“It’s easy to recognize the importance of this task,” Balazs tells us. “Ironically, it only becomes so important when all else fails, and even then, only for a tenth of a second. Therefore, on a well-behaving HEXA, ENDYs are dead weight. We needed a solution that could provide the best strength-to-weight ratio.”

The development team decided from the outset that the END-Y parts should be manufactured additively — just like well over a hundred other components on the aircraft — this time choosing to print using titanium due to the part’s load-bearing requirements.

Results from earlier efforts, including designing a model that could be produced through machining, had left the team unsatisfied. They wanted to reduce the mass of each part even further without impacting its strength, while they also found that the component repeatedly detached from the platform during printing, leading to errors and wastage. Having to start over each time caused considerable delays and drove up the average cost of each part. Whatever solution they found would need to greatly reduce the scrap rate.

LIFT’s answer to this dilemma was to turn to Materialise’s expertise in designing for AM. Together, they planned to leverage the freedoms of generative design and 3D printing to full effect while setting the safety factor for specific parts at much higher levels than necessary.

Based on the CAD data provided, the Materialise team first carried out a static simulation using the SOLIDWORKS software. Doing so provided the comparative values they needed to redesign the ENDY using Siemens NX.

Firstly, they used the NX topology optimization module to define the design space and the boundary conditions, such as the position of the fixation points, force attack points, and the direction and strength of the forces that the component would face in practice. Using this information, the software created a component model with visualized force flows, from which the 3D printing experts gradually developed the new component using free-form modeling within the NX Realise Shape Tool. A few iterations later, the perfect design was found.

“The computer came up with a really good solution straightaway that we liked, and that worked,” said Balazs. “And that structure could really only be made using 3D printing.”

The next step was to simulate the printing process with the Materialise Magics simulation module. For projects like this, simulation is crucial because the component and material structure are created simultaneously. This adds an enormous number of variables that can influence the microstructure and thus the properties and quality of an additively manufactured part. Having seen the results, the engineers optimized the component’s orientation within the installation space and made some final improvements to the part and its supports.

While the design and printing process had been tested, the Materialise team still needed to know that the redesigned ENDY parts had the required strength for the job. To verify this, the Materialise team carried out a static simulation, which proved that they would withstand all loads, while the first prints showed that all length tolerances were within the DCTG 8 (Dimensional Casting Tolerance Grade). In addition, the deformation of the component during printing was lower than that of the original design, as were the residual stresses during printing.

“Working with the team at Materialise, we confirmed the feasibility and fine-tuned the design based on their recommendations, ultimately making the part easier to print and more economical in terms of material usage,” explains Balazs.

“That’s really how we’ve been working with the team ever since. We send our parts, and the feedback that comes back is very constructive and has really helped us refine designs. Together, we’ve managed to design and produce this part with a safety factor of 10. Incredibly high.”

From dream to reality in just 13 months

Overall, LIFT Aircraft’s two initial goals — to reduce both mass and errors during printing — were met, with results that almost exceeded expectations. The final ENDY weighs about 40% less than the original, weighing in at 152 grams instead of 250 grams. With six ENDY parts in each aircraft, this accounts for a reduction of almost 600 grams from that part alone. On the other hand, by significantly reducing the stresses on the support structures, the team ensured that the ENDY part no longer detaches from the support structures and building plate during printing, leading to far less waste due to rejected prints.

Together, these improvements helped LIFT get off the ground in record time. In less than 13 months, Matt and his team went from novel idea to successful first manned flight, leveraging semi-autonomous flight control, electric propulsion, and a great deal of design skill and entrepreneurial enthusiasm to get there. All while maintaining a strict ‘safety first’ approach to every aspect of part development and production.

As one of the very first production eVTOL aircraft in the world, LIFT’s HEXA is already breaking new ground. CEO Matt believes this is a pioneering position the company is well equipped to maintain thanks to valuable lessons the team has learned and the technologies in play.

“Because we don’t have to obtain certifications, we can aim for product cycles that are much closer to what we see in the tech sector. We’re aiming for a cycle of 2 to 3 years, instead of 20 to 30 years, which is what’s typical in the aviation industry. And part of what enables that is 3D printing.”

“With additive manufacturing,” Matt continued, “you don’t have to invest in huge quantity orders that require molds and all that expensive stuff that only makes sense if you need tens of thousands of something. If you’re only going to make a thousand of something, it’s much more economical to 3D print. And then it’s also quicker, so we can iterate faster, and that next version can come out much sooner.

“Better still,” Matt concluded, “you can achieve all this and still prioritize safety. And that’s what it all boils down to. We’ve got a great responsibility. We’re going to be the first to launch a service where people can fly ultralight, electric aircraft with vertical take-off and landing. We take that responsibility really seriously. Which means we take the design and manufacturing technologies we use very seriously too.”

Speak with our team to discover how Materialise can help you in your Additive Manufacturing journey.